Welcome to PatNet Resort, the place for online Japanese Arcade aka. Medal Games. This guide is created for foreigners in order to enjoy most of the game's features. If you have any questions, feel free to ask by replying below.

SIGNING UP AND DOWNLOADING THE GAME


If you haven't signed up yet, you'd better, since you need an account to play the game. Go up and click on the red button. If you don't have one, that means you've already logged in. You will then be taken to this page, enter your email address and click the button, then check your email. Enter whatever the site tells you to, and click to finish registration (the first box should be pre-written for you, if not, take the four-letter code from the email and put it there). Once you finished signing up, you can download the game. Click ダウンロード above to download the file. You can work around the page so no pics for you. (Also, if the installer displays garbled message, don't worry, just proceed and check the box in the installer if it shows up.) (When you launch the game for the first time only, you won't actually see this page, you will see two buttons, click the right one to proceed to this page.)
So once you launch the game, it's just simple, type in your ID and password and hit GAME START. You might also want to check the box so in future launches, you don't have to type in your login informations.
When you login for the first time of the day, you get a daily bonus of medals or bonus wheel spins. A daily bonus card resets every 15 days and your login stamps are not lost if you don't login in consecutive days, but you will miss out bigger rewards at the end of the card. Then you are here at the lobby. Select the game you want to play by clicking on one of the FOUR lower-right buttons. Then select a Zone and room. Red rooms are currently full and cannot be joined, also some rooms are locked with a passcode. One Zone has 12 rooms and Zones 7-8 have chats disabled. When you select a room, a window will pop up (in the upper-right of the above picture) Click on the red button to proceed to seat selection. Select a seat (Station) to play. Red seats are currently occupied. Also, in PatolePusherQuintessence games only, you will see some balls in each seat. These are the balls left in the game by the previous player. Playing in those seats, you will inherit those balls to your game. (Hint: Try joining a seat with red or disco balls if possible, or just a seat with lots of balls.) Once you selected a seat, you will be taken to the game screen. When you enter any game, you will see a similar user interface. Click the white button to open/close the menu buttons. Also, before you play, you would have to deposit some medals first. Click the chip on the top of the screen to deposit. Click the arrows to adjust the number of coins you like to deposit (or cash out, though you don't have to cash out before you exit the game as the game cashes out automaticaly when you exit) Then hit confirm and you're ready to play.

If you happen to run out of medals, don't worry, because the game recharges 10 medals every 1 minute online and 10 minutes when you are offline (up to the minimum bank of 500).

So there you have it, the first guide to PatNet Resort. More guides about each of the three games (Patole Pusher Quintessence, Ferris Roulette and Cosmic Fever) will be posted here so stay tuned! Also, if you have any questions, Feel free to reply below or contact me through discord (at)NicoHolic777#8277 The highlight of PatNet Resort. One of the most exciting Coin Pushers you've ever seen, with lots of actions, jackpots and beautiful graphic, this game of chance is satisfying to watch!
In this game, you play medals and try to win more medals by dropping them, maybe play some mini-games and slots to win even more medals, or get a chance to win one of the two jackpots.

HOW TO PLAY
Once you deposit your medals, click/tap on the screen to start firing medals into the machine, you earn any medals that drop down the front. You can also spam Z and X buttons or hold A and D buttons instead of clicking.

SLOTS
If a medal falls into the moving hole, it adds 1 Lv.1 play to the slot game (on the left display). If three numbers line up (except 7s and SPHEREs), free medals is paid to the machine. The slot can hold 10 plays in the stock, so if the stock is full, future medals increase the level of the stocked plays, providing chances at a bigger payout (Lv.1 is x10, and adds by 5 every level until x30 at Lv.5) (You win the winning number multiplied by the level's payout so three 6s at Lv.4 wll give you 6x25 = 150 free medals,)
Winning with an odd number (except 7) also takes you to the red Chance mode where you play with 5 reels and increased chance (still, you only need 3-in-a-row to win, 4-in-a-row doubles your payout and 5-in-a-row triples it). Winning with an even number returns you to normal mode,
Hit 3 7s and you enter the Treasure Parade mode (or TREPARE) where thousands of medals can be won!
(Also, sometimes the game allows you to affect a slot's outcome, noticed by an odd music. See a red button? Smash it quickly! See cards? Pick one! See cups? Play a shell game!) Landing 3 SPHEREs on the slot triggers a Sphere Challenge. One white sphere drops in through one of the holes in the top wheel and changes color to the color that sphere passes through, providing medals, lucky slots, or a Special (disco) Sphere (which drops the same way as normal ones but doesn't change color). When you drop a colored sphere, its color is added to the gauge on the right. When you collect 5 spheres, you are awarded with a ColorCroon Challenge. The challenge consists of two wheels, the first one has 5 holes labeled A-E, and each of them changes color according to the color you collected in the gauge (e.g. A red A on the gauge makes the A-labled hole red) Each letter is also associated with a wheel. One ball is played, and whatever letter it lands on, you play that letter's wheel with the sphere of its color, The chosen sphere is played in the second part of the challenge, in the funnel while the wheel with Hit or Miss spaces. When the sphere lands in the hole, the wheel stops and the arrow tells you if it's a hit or miss. A miss gives you 20 medals and changes the space to a Hit for better chances the next time you challenge. A hit earns you a reward according to the color of the sphere, and resets the wheel. Some wheels have a Hitx2 space which, if landed, gives you double the winnings. Dropping the Special Sphere earns you a Sugoroku (Around The Board) Challenge where the ball is played on a wheel with 8 numbered holes. You advance around the board according to the number it lands on. Land on Jewelry JPC to win the Jewelry Jackpot Chance! Land on GOAL to win the goal bonus! Other spaces give you medals, spheres or increases the goal bonus (which resets when someone wins it). 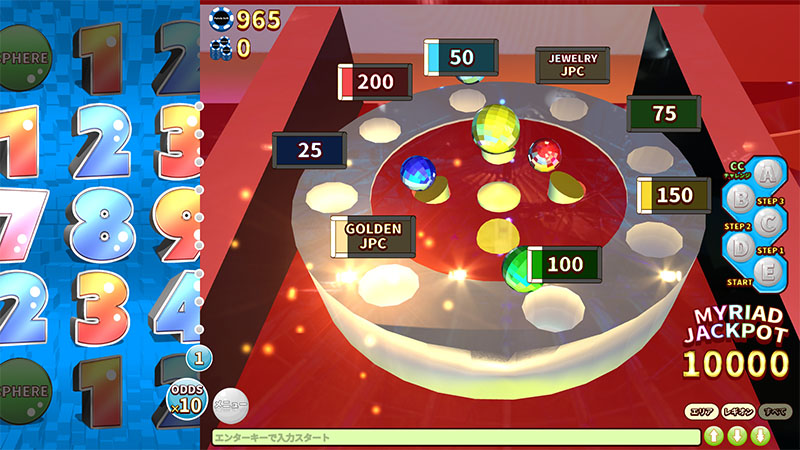 First, you spin the wheel to determine the bonus you get in this game. Then one mini ball is played and upgrades the pocket it lands on. All pockets start with a 100WIN space except for one (Treasure Parade) CHANCE space. Each upgrade turns 100WIN -> 200WIN -> CHANCE -> JACKPOTX1 -> JACKPOTX2 -> JACKPOTX3.
After 2 pocket upgrades (or more, according to the bonus), the mega ball is played. As long as the mega ball has not landed, the mini ball will continue to upgrade the pockets until the mega ball lands in a pocket, and you win whatever it lands (hopefully a Jackpot!). If the mini ball happens to upgrade a JACKPOTX3 pocket, then congratulations, you've won an ALL GOLDEN JACKPOT CHANCE, both balls will be taken out of play, all pockets will upgrade to Jackpots (with multipliers including 4X and 5X), and the mega ball will be replayed, landing on a guaranteed Jackpot!
Bonuses on the wheel include: Extra free pocket changes (+1/+2/+3), instant 200WIN upgraded pockets (3/5 pockets), Instant JACKPOTX1 upgraded pocket and DOUBLE MINI SPHERES (best one to land on, makes upgrades 2x faster) Unlike Golden JPC, in Jewelry JPC, you decide on which pockets to upgrade. First, you spin a wheel to determine the number of NEXT upgrades you get (from 5-12). then, you decide by clicking on the wheel replica, which non-Jackpot pockets you want to upgrade to a NEXT pocket. When you're done, hit the red button to launch the mega ball, hopefully landing on a Jackpot or NEXT pocket. Note that, there are Rounds in this chance. You are not actually playing for he Jewelry Jackpot in the first place. When you enter the chance, you are playing for the Sapphire Jackpot. Landing on NEXT changes the wheel layout and upgrades to a Ruby Jackpot (two times Sapphire), and then Diamond Jackpot (three times Sapphire). So you might not want to spend all NEXT upgrades on the first wheel because you only have that many upgrades throughout the whole chances. If you managed to get NEXT in all three round, then you'll enter an ALL JEWELRY JACKPOT CHANCE where all pockets are guaranteed jackpots and one of them is the JEWELRY JACKPOT, which is all three jackpots combined!

TREASURE PARADE MODE (OR TREPARE)
Landing on CHANCE space in either of the Jackpot chance awards a Trepare Chance where you pick one card, winning medals or the Treasure Parade Mode. You can also enter Trepare when you get 777 on the main game slot. Trepare is where big wins can be won because the main game's slot turns into a Sugoroku game where you win in most spins! Slot stocks are now used to spin the number wheel, with you moving around the board according to the number. If you land on a x1/x2/x3 space, you win medals (ODDS x multiplier x Slot Lv. # = WIN so a 3x win on Lv.5 with ODDS =5 would give you 3x5x5=75 medals). Other spaces and features can be learned easily by playing. Your ODDS starts at 5, and when you overshoot ODDS RESET space, your ODDS increases according to the number of spaces you overshot. Stopping at ODDS RESET resets the ODDS.